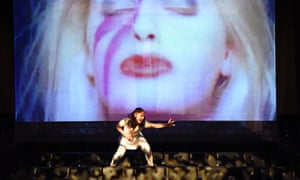 The Concrete Dreams tour ends with a live performance at Southbank’s Purcell Room. Photograph: Linda Nylind for the Guardian

Concrete Dreams, which opens on Tuesday, is a tour through 50 years of archive material, imaginatively presented in dressing rooms, bathrooms and other backstage areas.

It is a tribute to the eclectic talents who have played there over the years. Rifle through a box of index cards and find handwritten notes recording performance dates for Stan Getz, Roaring Jelly and André Previn.

Meticulously kept attendance books list artists who played there and how many tickets they sold. Pick up the receiver of a dial telephone and hear oral histories from those who worked at the venues.

Concrete Dreams is heaven for architecture nerds too. Original hand-drawn plans for the building line the corridor walls and are used in animations projected on to office windows, accompanied by Steve Reich’s music. 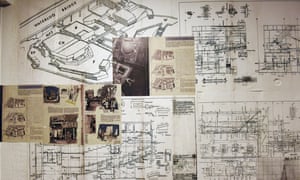 The exhibition features original plans of the building. Photograph: Linda Nylind for the GuardianYou can watch TV documentaries about London’s 60s building boom and listen to Harold Wilson’s 1963 speech about the “white heat” of technology. In wood-panelled dressing rooms, concrete cores removed from the QEH during rewiring are displayed alongside scale models.

The tour ends with an arresting live performance in the Purcell Room that captures the venues’ incredibly eclectic artistic history with sophistication, style and humour. The finale features footage of Merce Cunningham’s dancers, the Orchestra of the Age of Enlightenment and Lemn Sissay among many others.

The exhibition has been created by design practice LYN Atelier and performer collective KlangHaus, who had a hit at the Edinburgh festival in 2014 with an atmospheric gig-come-installation staged in a former small-animal hospital. That show was a sort of musical mystery tour, with projections on the walls and performers popping up in unexpected places, playing right under the audience’s noses.

The company’s ethos is to make “a collaboration with buildings” and they say they became obsessed with concrete while preparing the new exhibition. They have even used tracks by musicians who trained as architects: the composer Iannis Xenakis and Pink Floyd. 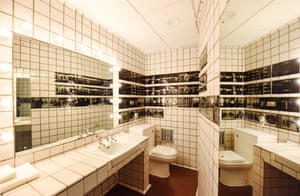 The bathroom is used to display images from the Hayward Gallery. Photograph: Linda Nylind for the GuardianKlangHaus’s Jon Baker explains that they chose to open and end the tour with birdsong – a reference to the bird noises on Cirrus Minor by Pink Floyd, who played at the QEH in 1967, and to the influence of birdsong on other artists whose work has been heard at the venues, from Olivier Messiaen to gamelan musicians.

“We had this weird notion that when you build a building, what you’re actually doing is enclosing the outside. You’re colonising a space that was once outside,” says Baker. “So we wanted to bring the sound of birds into the building.” As part of the Concrete Dreams season, there will be a concert of Sam Lee’s Singing With Nightingales, an evening of “human-bird duets”.

Georgia Ward, participation producer at the Southbank, said: “We wanted to talk about the amazing history and design of these buildings, but also the performative history. There were some real firsts here: Mike Oldfield’s Tubular Bells, Jessye Norman did an extraordinary performance, Different Trains by Steve Reich. We knew KlangHaus could play with the archive in a beautiful, creative way.” 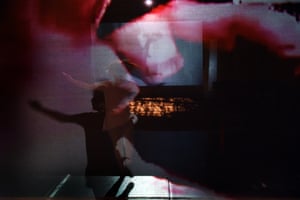 The multimedia performance in the Purcell Room. Photograph: Linda Nylind for the Guardian

The Southbank Centre’s Royal Festival Hall was built in 1951 for the Festival of Britain. Sixteen years later, it added the QEH, for classical music, dance and opera, and the smaller Purcell Room for chamber music, solo concerts and cabaret.

Concrete Dreams also acknowledges the history of the Hayward Gallery, which opened in 1968. A backstage bathroom features displays from the Hayward’s 1969 pop art show and the 1972 exhibition The New Art, where Gilbert and George were billed as George and Gilbert. On the bathroom wall, beautiful silhouettes of photographed visitors at the gallery’s 1970 Kinetics exhibition stand out against the white tiles.

The free, one-hour guided tours, supported by the Heritage Lottery Fund, are designed for 15 visitors at a time. Concrete Dreams runs until 29 April and culminates in a three-day festival including a workshop run by the Rambert dance company who once rehearsed in the QEH’s foyer.